After Baden-Powell’s book “Scouting for Boys” appeared in 1908, Scout Groups started spontaneously throughout Great Britain and Ireland. Some Groups, including 1st Dublin Troop, Boy Scouts (founded 15th February 1908 by Capt.Richard P. Fourtune RNR) included boating in their programmes from the beginning, and B-P soon recognised that this was an excellent variation of the Scout programme. Sea Scouting was officially recognised in 1910, and B-P wrote the first introductory pamphlet “Sea Scouting for Boys”. Later B-P asked his brother Warrington, a well known yachtsman, to write a handbook for the new section, and “Sea Scouting and Seamanship for Boys” was published in 1912. 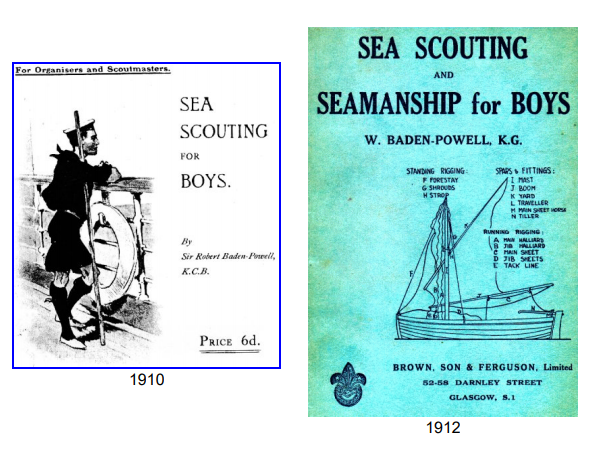 The first Sea Scout Troops in Ireland were registered in 1912, in Bray and in Ringsend (1st Dublin Troop mentioned above), where B-P then appointed Lieut. Henry J.Rundle RN, Officer-Charge, HM Coastguard Malahide, as the 1st Commissioner for Sea Scouting.
Other Troops developed in Dublin in the succeeding years, in most cases alongside HM Coastguard Stations. In 1914 the first inter-Troop rowing race for the Wood-Latimer Cup was held. This event was the start of the Annual Sea Scout Regatta and continues to this day, making it one of the oldest Scouting events in the World.
With the outbreak of World War One, many Sea Scouts and their leaders joined the Royal Navy, often as Signallers or Coast Watch.
In 1915, the Dublin Sea Scout Troops were grouped together in the Port of Dublin Sea Scout Local Association, and they were allocated “Port of Dublin” numbers, a custom that still continues. The annual Seamanship Competition for the Fry Cup started in 1918 with the presentation of a handsome silver cup from Major-General Sir William Fry to the Port of Dublin Sea Scouts. The event continues to the present day and is regarded as Sea Scoutings most prestigious cup to claim.
29 Dublin Sea Scouts attended the 1st World Scout Jamboree in London and were accommodated onboard the HMS Sharpshooter. 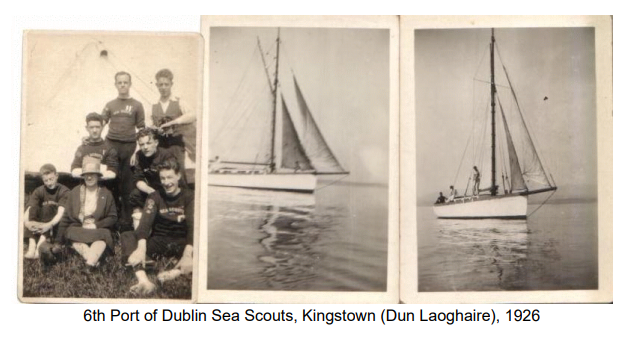 With the foundation of the Irish Free State in 1922, saw the exist of HM Coastguard from Ireland. This had a huge negative impact to many of the adjoining Sea Scout Troops. In addition, with the growing sense of Irish Nationalism, Scouting was seen as a very British organisation. To that end, the Catholic Boy Scouts of Ireland were founded in 1927, and started a Sea Scouting programme a year later, basing the organisation of the Boy Scouts of America model. This was a Senior Section, over 14 years of age who formed themselves into ‘Ships’ or Units. By the late 1930s CBSI had about 10 Ships (Units) in the Dublin area, and Ships in Cork, Galway, Waterford and Wexford, a total of 14. These Ship were also given ‘Port Numbers’ alongside their UK Boy Scout Association counterparts. 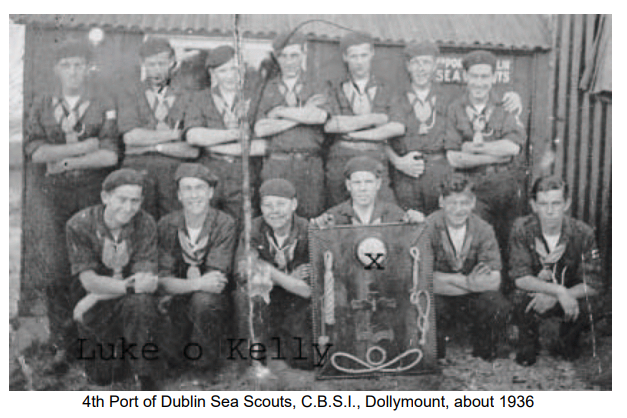 1948, the Boy Scouts of Ireland is established and becomes independant of the previous British Association. This will later be renamed as the Scout Association of Ireland. A period of growth starts within Sea Scouting in Ireland; x2 troops in 1948, to x4 in 1958, x12 in 1968, x38 in 1978. The first of these Troops outside Dublin was 1st Wexford (New Ross) in 1965. The very rapid growth between 1968 and 1978 was a mixed blessing, and a number of troops did not survive for very long, mainly due to problems of back-up support and of maintaining adequate supply of Leaders.

In the mid 1970s the former lightship, “Albatross”, was acquired as a Sea Training Centre. This was a great boost to training and was an activity centre where troops with little equipment could send Scouts for boating experience. She was moored in Dun Laoghaire Harbour for many happy years. In 1976, the Irish Sea Scout Standard Boat, the “BP-18” was designed by Kevin McClaverty, and has proved to be an excellent general purpose craft for Sea Scouts.
The BP-18 was designed to accommodate a Watch (Patrol) and could be sailed, rowed or fitted with an outboard engine, making it a very versatile boat that could fit around the needs and skills of each different Sea Scout Group.
Over 40-years later, x28 BP-18s can still be found floating in the lakes, rivers and coasts across the Country.

In the 1980s, CBSI remove Sea Scouting from their programme and develop a Water Activities Centre at Killaloe on Lough Derg on the Shannon. In 1985, SAI published a new series of handbooks covering the nautical requirements of the Sea Scout programme (Sea Training Handbooks, Parts 1 & 2), and also a Sea Scout Leaders Handbook. These books are a wealth of information and are used a base standard for the next decades. 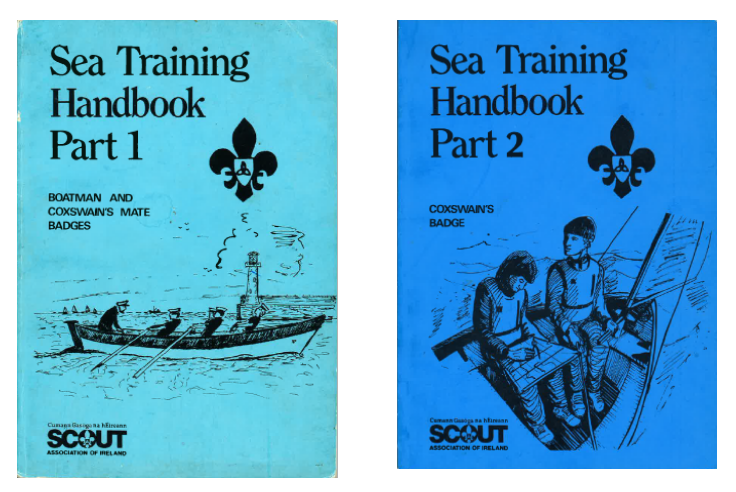 From 1998 to 2002, SAI complete a very detailed examination of the Sea Scouting programme. This included a country-wide survey of all Sea Scout Troops, with questionnaires for each Scout and Leader on training schemes and programmes, uniform, activities and competitions. A committee was established to examine the Sea Scout Programme in detail, using the Renewed Approach to Programme (RAP) method recommended by World Scouting. This was a lengthy process involving 9 stages, with masses of paperwork. The new programme was designed, and a new advancement Badge Scheme was devised to implement it. The new Sea Scout Programme was launched in 2002, and includes a completely revised Progress Scheme, balanced between ashore and afloat, with a wide choice of activities. 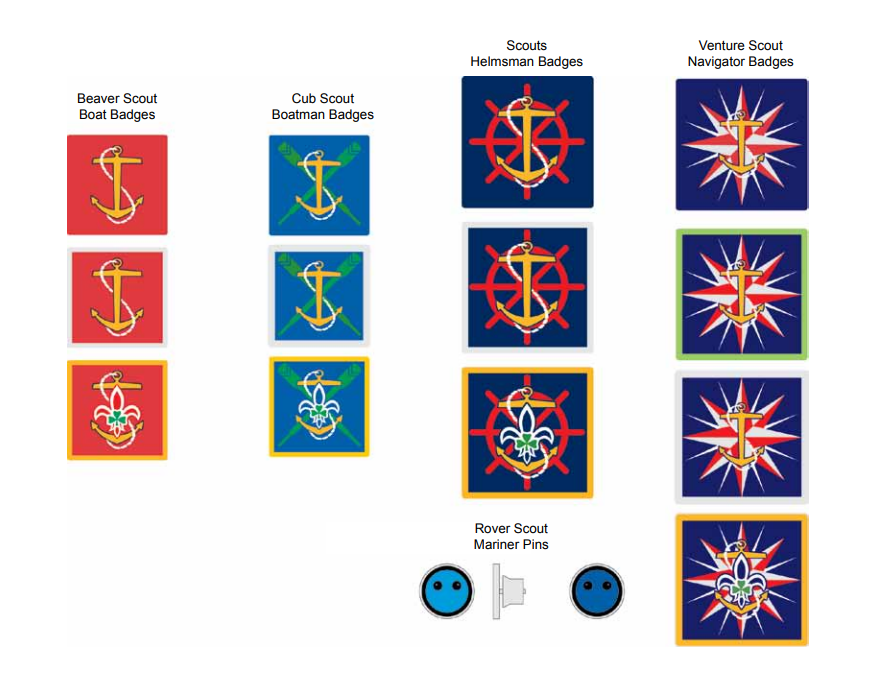 21st September 1912
2nd City of Dublin (Gardner Street) register as Sea Scouts in Dollymount with William J.Perrin as their Skipper.

1913
1st Dublin Sea Scouts attend the Scout Rally in Birmingham and place 2nd in all-round seamanship competition and were presented a compass from Warrington Baden-Powell.

1914
T.J.Wood-Latimer presents a silver rose-bowl for an annual inter-troop competition.
This becomes the Sea Scout Rowing Regatta and is still held annually to this day, making it one of the oldest Scouting events in the World.
Today regarded as Sea Scoutings premier cup.

1918
4th Port of Dublin (1st Bray) reverts to the local Wicklow Scouting Association.
Major-General Sir William Fry presents a handsome silver cup to the Port of Dublin Sea Scouts for an annual seamanship competition.
This event continues still to this day and is regarded as Sea Scoutings most prestigious cup.

1919
4th Port of Dublin given to new Malahide Troop.
Major-General Sir William Fry appointed Lieut.Governor of the Isle of Mann.

November 1920
The Irish Scout Gazette reports of a Sea Scout Troop in Derry.

1927
The Catholic Boy Scouts of Ireland is established by Fr. Ernest Farrell, a curate in Greystones, Wicklow.

1935
4th Port of Dublin relocates to the Dodder Bank with William J.Perrin as their Skipper.
Launch new East Coast Skiff St.Columba, donated by the Knights of St.Columba.

1939-1945
World War Two including the creation of the Maritime Incription and Reserve.
All CBSI Sea Scout Units close.
Only 1st Port of Dublin (Ringsend) and 4th Port of Dublin (Dodder) remain.

1968
x12 Sea Scout Troops exist.
Boy Scouts of Ireland renamed as Scout Association of Ireland and for the first time welcome females to the organisation.

1980
CBSI remove Sea Scouting from the programme and develop the National Water-Activities Centre on Lough Derg.

2010
Scouting Ireland launch the ONE Programme.