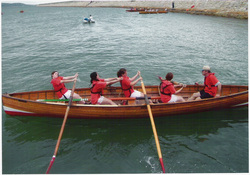 Working as a team is an important part of scouting. The crew for a rowing boat is a natural team. A scout needs to be able to pull their weight in a crew, be vigilant as bowman and even be able to take the helm should the need arise.

There is a number of different ways of giving commanders in a rowing boat. It doesn’t really matter which one your group uses so long as you all use the same one. You can grunt and whistle so long as everyone in the boat is clear what each noise means and that they then act together as a crew.

Getting your crew Rowing 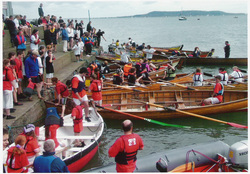 Getting in and out of a boat is always best done in an orderly fashion.

It makes sense to assemble ashore and decide who will do what. The cox will then ask the bowman to hold the boat alongside while the cox gets in. Local conditions will dictate if the cox boards at the bow, the stern or along the beam.

By giving the crew a moment between commands it is easier for the crew to coordinate their actions, especially when sighting and shipping spurs and oars.

Once the rest of the crew are as ready as possible (sometimes it isn’t possible to ship oars while alongside) the cox calls the bowman aboard and calls for the boat to be pushed off. A little thought on which direction to push off will make life much easier for the crew and cox.

When underway the cox should give a command at the beginning of a stroke. The crew completes that stroke before carrying out the new command.

Disembarking is essentially the reverse of getting under way.

After coming along side gently. The bowman should not have to exert too much effort to fend off and should communicate with the cox if they think the approach is too fast. A wise bowman will keep hands and fingers well clear if the cox messes up. It is far easier to fix a broken boat that to fix with crushed fingers!
Safely alongside the bowman then secures the bowline and holds the boat alongside for everyone to disembark.

Finally the cox makes sure that the bowline is secure before dismissing the crew.

While no ratios are formally laid out at the moment prudence suggests that the sky is not the limit. An Intermediate Charge Certificate holder can take charge of a boat they are not actually sitting in while in Safe Enclosed Waters, but how many such craft?
Common sense would suggest that about 12 people per Charge Cert holder is a reasonable limit. It represents the crew of 2 BP18s or East Coast Skiffs, for example.
If a single Charge Certificate holder is taking charge of a flotilla of punts prudence would again suggest a limit of not more that 5 craft per charge certificate holder.

What should we do to protect oars from the elements?

It really doesn’t matter what you put on it if the surface isn’t well prepared. All lose material removed, wood sanded back to sound wood. Make sure they have had a good while to dry out beforehand otherwise you just end up trapping any moisture under the varnish which will inevitably lead to the wood rotting and the varnish falling off.

It needs to be a yacht varnish. (for UV stability and a bit of flexibility) The range of prices is huge and most of the value is in the pretty colours on the tin.
Spinnaker Standard is my first choice. It’s not terribly expensive and performs as well as any of the others that I have tried.

As an alternative, a million coats of Boiled Linseed oil (still on prepared surfaces) has the advantage that it is very easy to maintain. A rub with an oily rag from time to time will keep them in perfect condition.

Another alternative which is gaining popularity among the boating community (although my own observation where I have seen it used is that it isn’t great) is to use something like Sadolin which is a moisture permeable barrier. The advantage is that it is supposed to allow the wood to breath but in a permanently damp environment I fear that it will allow the wood to breathe in as well and raise the moisture level to the point where decay can commence.

On the whole I would still go for Spinnaker yacht Varnish unless they are very old and discoloured oars in which case boiled linseed oil would be my choice.

It is traditional, but not necessary, to paint the blades of the oars (usually in the colours of the group neckerchief). This is done with regular gloss paint over the appropriate undercoat.

Whatever you do put on, it is best NOT TO put anything on the grip of the oar. Sweaty and oily palms are enough to keep the wood treated and it (slightly) reduces the risk of blisters on tender hands.

Documents at the bottom of this page are aimed at rowing and taking charge of rowing craft.